A Guide to Federal Proposal Pricing

It seems that pricing is almost a hidden part of the proposal development process, tucked away from the war room. Often the pricing volume has its own review schedule and process.

In this episode, we break down how pricing works, from shredding the RFP to the final formula.

Prefer to read? Here's the transcript.

Ray Thibodeaux: Today's topic: pricing. And that's something that usually takes place kind of behind the curtains of what we do. But we have someone here who can shed some light on that. I'd like to welcome our guest, Tom O'Connor, a pricing specialist and someone who has spent much of his career as a finance director for the biggest communications providers in the country. Hi Tom, thanks for being on the podcast.

Ray Thibodeaux: It seems that pricing is almost a hidden part of the proposal development process, something that's kind of tucked away in its own room apart from the rest of the war room. Often the pricing volume has its own review schedule and whatnot. Is that intentional or is that an inevitable result of two very different processes for pricing and proposal development that they would naturally kind of take to their own corners?

Tom O'Connor: Little bit of both. I mean, I think it's partly intentional. You don't want to reveal what the margins are on some of these things because of the inclination of the people to drive the margin down whether it's needed or not just to be sure. But I think they're very integrated in the basis of estimate development. I don't know that they're a breed apart but they do withhold certain information from the overall proposal team that typically, my experience is they are a part of the solution development.

They have to be to identify the costs, or collect the costs and know which services they're proposing. And lots of times the salespeople do have some pretty good price to win information. They know their customer and they know what's been sold to them in the past and by whom and what those rates are. A lot of sales teams are transient between companies and so you pick up some of that information.

Ray Thibodeaux: It seems like a lot of companies, even the big ones, farm out pricing tasks to consultants. Are these companies somewhat siloed when it comes to competitor pricing and consultants give them a broader industry insight? Why do you think companies so often hire consultants for pricing elements of a bid?

Tom O'Connor: A few reasons. I think one could be they have a surge in pricing requirements and they don't have the staff to do it. Or some of the smaller companies it's not cost-effective to staff up for it. But in general I think most of the time that consultants are brought in it's for price to win. And the reason they're brought in for that is not necessarily that the people working in the company don't have some experience in that.

They typically do but the good price to win consultants have worked for a variety of companies and know the market price for certain services or know the services, or know what rate per hour is required for that type of support and for that particular customer. So a lot of times it's just to use as a check. And in some cases where the company doesn't have too much experience for that, they'll bring them in to kind of validate or help them develop what the price to win is.

Ray Thibodeaux: Is there a practical easy-to-follow process for pricing that you could describe? One that goes from shredding the RFP to actually filling in the Excel spreadsheets?

Tom O'Connor: There is. You got to start with identifying what you believe the requirement is. And most of the time, that's identified in the RFP but sometimes you have some insights that are beyond the RFP. And then from that I guess it kind of depends upon the service. Pro services you develop like a basis of estimate, how many people you would need, what those labor categories would be, then what levels within those labor categories you're going to develop. But they take the RFP and they chunk it down, break it down into the lowest possible work element or bidding component and then build the whole case up from there.

Tom O'Connor: And on the network services side, it's typically you have solutions architects that are working with the team, including sales and the program people and pricing. And they determine what specifically the customer is asking for or what we believe they need and then develop the services and identify the costs required to provide those services.

Once that's done, then on the pricing side, take a look at similar bids, similar services, what we believe the going rate is for those services or for those labor categories through either previous bids or researching existing contracts, or use a price to win consultant. You develop the pricing based upon that and typically, most companies they have an approval process threshold set up where it depends upon the value of the bid or the margins that are proposed, you have to go to a certain level, go all the way up through. And then once that's done, and it's been approved, then you've got to enter that information into the required pricing templates from the customer.

Ray Thibodeaux: I've been surprised by the number of companies without a documented procedure for estimating the cost of a contract. Generally, money goes out the door when aspects of a project are overlooked and not priced. And for large manufacturing contracts especially, a small oversight can end up costing hundreds of thousands of dollars, possibly more.

So it's surprising how often the estimating process isn't given the priority it deserves, especially if the government isn't asking for the actual bases of estimate to be submitted with the proposal. Do you find that to be true in your experience, or do you help companies like that set up or fine-tune their estimating processes so that all billable contract-related tasks don't fall through the cracks?

Tom O'Connor: For the most part, I have not experienced that. I've worked with large companies, both as an employee and also as a consultant. There have been some instances with some smaller companies that the process is kind of just thrown together or it's just known by the folks that are there but it's not documented. And you're right. Sometimes people will miss things in the RFP or interpret them in the wrong way. So I've helped out in those instances and made some suggestions about how to improve their process when they are going after a particular piece of business. But I'd say that probably occurs in smaller companies, where people have multiple hats and the focus is not there. But I haven't really seen too much of that.

Ray Thibodeaux: There seems like there are all these connections between the work breakdown structure, related to bases of estimate. Are there kind of fail safes in most systems that you've worked with to where those types of things don't happen, where things don't get overlooked, activities, or let's say transition, how is transition billed? Are there safeguards usually in place so that things don't fall through the cracks?

Tom O'Connor: Yeah, usually throughout the proposal development process there are different reviews. A red team review, a yellow team review, whatever. And some of the people usually, we have people on the reviews that weren't part of the proposal development process for that particular bid and so they'll look at it with a clean set of eyes or an objective set of eyes. So I think that catches most of it.

Tom O'Connor: And you'll have those people from the respective disciplines. So you may have a solutions architect looking at it that wasn't part of that proposal and the same with either contracts or pricing or whatever function you're concerned about. But I'd say most of the time those are caught through those reviews.

Ray Thibodeaux: And as a proposal writer myself, I want to get in at least one question about the narrative aspect of a cost volume. Typically lowest price, technically acceptable doesn't require much of a narrative, but there are best value acquisitions. And so my question is, what's the real focus of the cost narrative and best value acquisition? Is it merely substantiating the costs or describing the trade-offs that you've made in order to achieve best value? What do you think evaluators want to hear in their cost volume narrative?

Tom O'Connor: Mm-hmm (affirmative). Again, I think it depends upon what kind of service you're offering, if it's professional services or network. And also, it would vary with the customers. But typically what's in the cost narrative or pricing narrative what we do is identify all of the assumptions we've made in that particular solution we're proposing. I have been, or we have... I have used that to identify an alternate proposal. So sometimes we will meet the specific requirements of an RFP, and develop a bid based upon that but then we'll also have like a parallel bid where we'll say, "Well we think this is maybe a better way to do it," and we could describe that and price that out in that cost narrative, or pricing narrative.

Tom O'Connor: Excepting that, I think most of the time it's just an explanation of the assumptions that you've used in developing your pricing. Also maybe kind of a validation of what rates or what costs that you've used. If it's a professional services bid, it would have to be a DCAA audited rates or forward-looking rates, or if it isn't, then you're making some assumptions about what your indirects would be in the future and you'd have to identify those. And if they varied, or you could potentially recover that. But it's mostly describing what's in your bid and what the assumptions were to derive those prices.

Ray Thibodeaux: Well that's very helpful, Tom. Thank you for being on the podcast.

Ray Thibodeaux: I'm Raymond Thibodeaux and this has been Keys To Winning, from AOC Key Solutions Incorporated or KSI, a consulting firm that has helped companies across the country win billions of dollars in federal contracts. Learn more at www.aockeysolutions.com or follow us on LinkedIn. Be sure to subscribe for more podcasts in this series and thank you for listening. 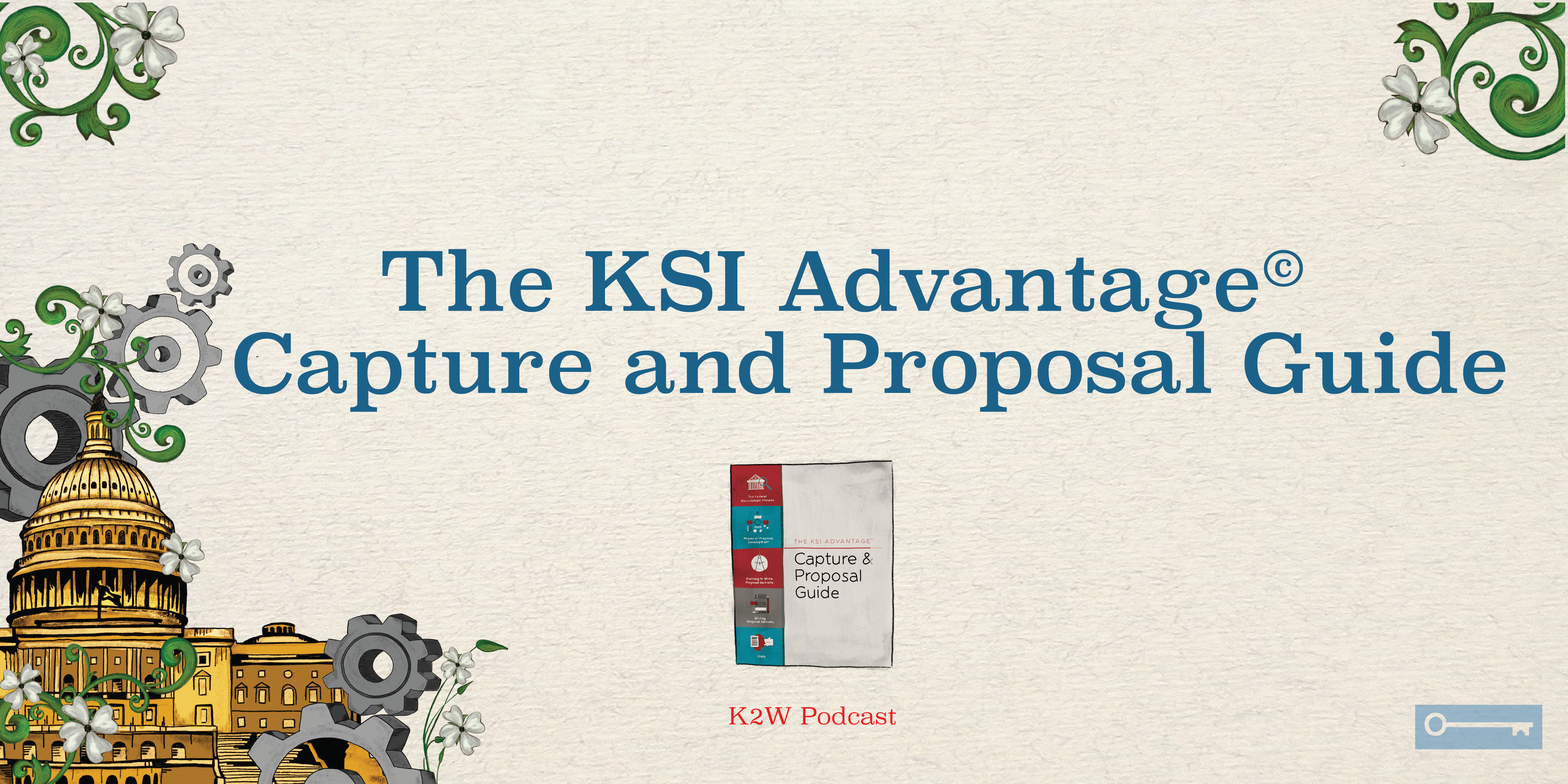 How to Improve Your Proposal Process Using Agile Methods